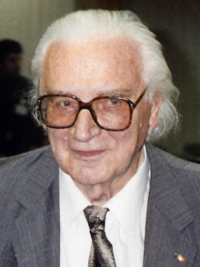 Konrad Ernst Otto Zuse was a German civil engineer, inventor and entrepreneur (Zuse KG). From his development of the Z3 in 1941 he is considered to be the inventor of the modern computer.

Even during his youth Zuse had a talent for bringing his visions to paper in artistic form as well. "I never studied art, but neither did I study information science" - the words of Konrad Zuse about himself, who in later years created art in the form of oil paintings, pastels and linocut under the pseudonym Kuno See. The artistic side of Zuse is today unknown for the most part and paintings are difficult to obtain.

In the early 1990’s W&T became interested in Konrad Zuse and purchased a few original works. We are offering 50 x 70cm prints of the 3 images shown here.

There may be remainders of stock of the art prints available. If you are interested, please send your request to info@wut.de.
Up