Golang on Windows for ARM-Linux systems

This manual is intended to serve as an introduction to the development of individual communication and automation solutions based on ARM-Linux systems in Go.

This language developed by Google is fast and easy to learn, but in contrast to script languages it is also very powerful and high-performance. It comes with a cross-compiler for ARM-Linux systems and offers a very simple workflow for programming the pure.box, the versatile communication and automation server from Wiesemann & Theis.

After installing and configuring a work environment, this tutorial shows you how to work with the Gotool using the command line with the example of a simple Hello-World program for the pure.box.

Go is free software and can be downloaded from the project page. After installing, a few environment variables must be set and adjusted:

Click in the Control Panel on System, then on Advanced system settings. Here you will find the button Environment variables. 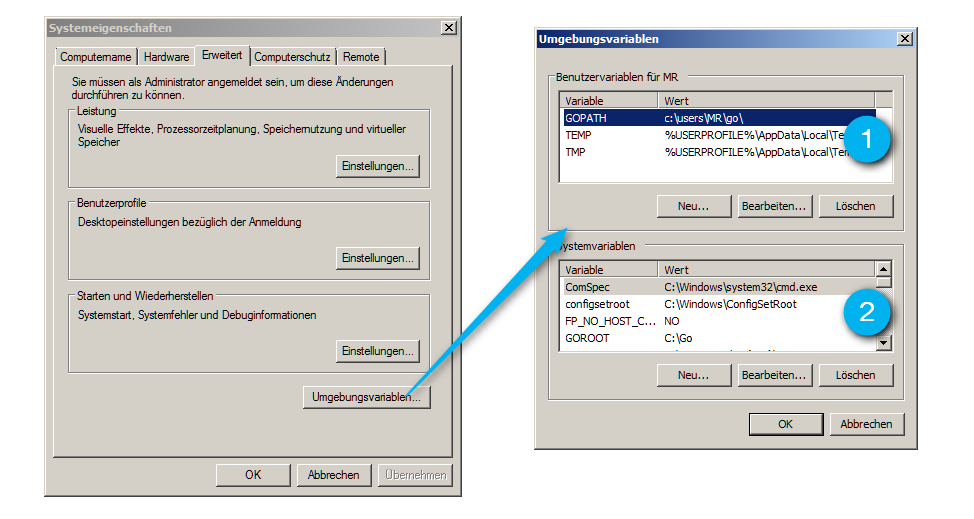 To install language extensions and packages from third parties without great effort, Go uses Git, the software developed by Linus Torvalds for distributed version management. This can be downloaded from www.git.scm-com

The go tool is the Swiss army knife for Go development. To check whether the installation was successful, you can use it now to display the Go environment.

Open the command prompt and enter the following command:

An overview of all environment variables relevant to Go is now output:

If an error message is displayed, the bin directory in GOROOT is probably not in the search path. Check the environment variable PATH using the command echo %PATH%. Then check whether GOPATH matches your working directory.

To compile the program, enter the following command:

If you have not received an error message, the translation was successful. The executable file hello.exe can now be found in the bin directory of its Go-Path.

Go makes it very simple to compile applications for other target platforms. To translate the Hello World example for the pure.box, you must simply set a few temporary environment variables:

Enter the following in the input prompt:

Start the cross-platform translation by changing to the source code directory and there running go build:

As you can see, the working directory not contains the executable file hello. Cross-compilation with Go is just this easy!

Step 4: Run on the pure.box

There are various ways to transfer the binary to the box: In addition to access via FTP, the box can be directly incorporated into your Windows network via SMB.

Since the simplest way to try out a change is to manually run it in a terminal session, SSH should be enabled on the box. This makes data transmission via SCP obvious.

If you have not yet installed an SSH client, download for example Putty. For SCP you need the following parameters: The user name is "admin", the password is the administratorpassword you set. As host name specify host name or the IP address of your pure.box.

Connect to the pure.box with Putty or using the ssh-command.

Then run the file hello in the directory /data/userfiles.

Still have questions? Just call us!

Do you still have questions about this guide? Our Support group will be glad to help you!