Automation technology most often involves hardware components from many different manufacturers combined in a system. It used to be that every manufacturer went his own way when it comes to passing process data up to the software level. This is true of both the physical communications path and the data format.

To get away from this process data confusion, the original OPC standard was introduced. Leading the way was the OPC Foundation in 1996 as a non-commercial entity. Members of the OPC Foundation are representatives from leading companies in the field of automation.

The goal was to crate a globally accepted standard for communication in automation technology.

OPC DA is not a network protocol as such. It is however an important industry standard and can, depending on the terminal device, also have points of contact with network communication.

OPC stands for OLE for Process Control, where OLE is the abbreviation for Object Linking and Embedding. The basic idea of OLE is structured embedding of documents from other applications into one’s own application, for example inserting an Excel document into a Word file.

OPC-supported applications do not communicate directly with the accessed terminal devices. Instead an OPC server is installed for the terminal device in question. The OPC server is a software process that runs the manufacturer-specific communication with the terminal device in the background - similar to a hardware driver on the actual PC. The process data made accessible in this way are prepared according to the OPC standard and passed to the application in a standardized form.

The component of the application which communicates with the OPC server is called the OPC client.

The original OPC interface made a distinction from four main tasks:

OPC treats and process data as single data end points. A data end point can be a measurement value, a process status, a switching state and much more. The individual data end points are referred to as items. THe items can be read or written depending on the type.

All items have an Item-ID, a unique address occurring only once in the OPC server. Each item has an undetermined number of properties, such as value, quality, time stamp etc.

The OPC server generally combines the items into groups. The result is a kind of hierarchy (OPC Server > OPC Group > OPC Item).

In order to provide the OPC client with easy access to all available items, many OPC servers permit OPC browsing by the OPC client. The OPC client can query all items in a kind of directory tree structure. Here as an example the structures of the items for a W&T Web-IO 2xDigital and a Web-Thermo-Hygrobarometer. 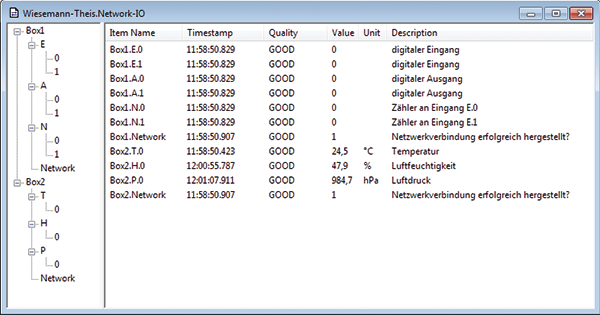 When does it make sense to work with OPC DA?

Whenever you need a flexible application that has to exchange data with the hardware from different OEMs without great effort, then OPC is the ideal solution.

But even with all the advantages of OPC technology it must also be acknowledged that programming a universal OPC client application is a complex task which demands a high degree of programming competency.

So when the goal is to create a special application for a special terminal device of a manufacturer, it’s worth considering whether it would be simpler to take the direct communication path provided by the OEM.