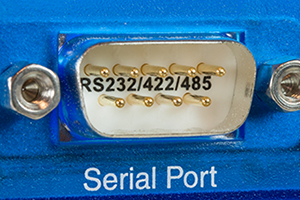 Over the past few decades the manufacturers who have done well are those who have equipped their devices or machines with RS232/422/485. No other interface is so simple and economical to implement, is supported by so many manufacturers and users, and for no other interface is there such a wide range of proven accessories available. Equipped with these virtues the serial interface also plays an important role in the context of Industry 4.

As strange as it might sound in the age of TCP/IP Ethernet and USB: Even today UART-based serial interfaces with the overlying fieldbuses offer many advantages over their more complex successors.

From the point of view of device manufacturers a serial interface represents a simple and economically implemented physical layer. Many CPUs and microcontrollers already include a UART as communication interface which is easy to handle for programmers, is transparent and memory- and power-saving as well. If one then decides on a correspondingly simple, openly documented communication protocol such as Modbus, linking to higher level systems is also already taken care of. The remaining development time can then be limited to the actual core competency of the device, such as measurement data capture.

The same device with an Ethernet or USB interface would surely require use of an embedded operating system together with all the associated familiarization and upkeep effort for getting the required protocol stacks. It’s obvious that this significantly and unnecessarily increases the complexity of the project in terms of hardware requirements as well as software engineering.

In the case of USB the problem on the communication partner side is that a special driver is needed for the operating system used there. Regardless of whether the decision is made to program one’s own driver or simply employ as standard driver: Increased support effort on the part of the user and the risk of system crashes when errors occur must also be figured in.

Users as well are treading on familiar, accepted and secure ground when it comes to serial interfaces. Incorporating devices through COM ports or TTYs has been familiar for decades, and neither startup nor operation is difficult in practice. If a piece of hardware does fail, the problem can be resolved simply by replacing the device, with no need to get into the sensitive software environment.

There is already a wide range of external accessories available for serial interfaces, whether RS232, RS422 or RS485. Greater distances and potential-equalizing problems can be easily overcome using suitable line drivers or isolators for up to several kilometers. Conversion to other physical transmission media such as fiber optics or RF is implemented using appropriate hardware converters, and integration of TCP/IP networks with worldwide availability is no problem.

We are here for you
Do you have questions pertaining to serial interfaces and network connection?

It is impossible today for the individual device manufacturer to implement every single interface that someone is trying to make popular through standardization or normalization. Device manufacturers and users need a basis to avoid getting lost in the plethora of interfaces. And what could make more sense than taking an existing interface like RS232, for which there is already broad knowledge and acceptance, which is used virtually everywhere and which causes no conversion problems and costs so little while already incorporated standard in every device. All of which is an argument for the device manufacturer or user not to go crazy and invest in the panic-driven development of every conceivable new interface. Only so long as the mid-tier all uses a simple to use and established data interface does the variety among many manufacturers result which every individual needs to use his devices in every conceivable application. And only in this way is the constancy over time achieved which is the prerequisite for getting back the development costs which we all have in our devices.