He who sells or installs computers connects his products to an electrical installation that, perhaps, was set up years ago And he assumes that the work done previously was carried out correctly. But experience shows that between 10 % and 50% of all installations have hidden deficiencies that in part can lead to considerable problems in electronic data processing (EDP) equipment. 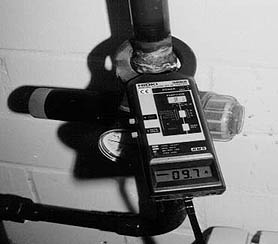 A typical situation as it exists unnoticed in nearly every other facility construction:

9.7 amps of equalizing current flow through a water line and cause inexplicable and non-reproducible system crashes, for which the EDP company is generally held responsible...
The "usual" counter-measures against system crashes in the form of surge diverters provide no help in such a situation, since they have no effect on equalizing currents.

But why doesn’t a proper electrical installation prevent the occurrence of such equalizing currents?

The German VDE regulations were not created for the EDP sector. Why should all buildings be wired according to electrical regulations to be on the safe side, even though they are only necessary if the occupant intends to install a large EDP system?

It is the job of the computer installer to ensure that the tighter demands which his technology places on the building are also met. If you are working blind in a building which is wired correctly but without consideration of EDP requirements, it shouldn’t be any wonder that noise, inexplicable system crashes and lightning damage occur.

The main problem is in how the ground wire (PE, the yellow/green wire in the electrical installation) is routed.

The function of the yellow/green protection ground is clear to any technician: If a defect allows a 230V line to make contact with the metal base of a lamp or a computer, the user can be electrocuted. To prevent this, all metal parts are tied to the protection ground, which itself is connected to ground potential. The above described defect then causes a short circuit, which in turn trips the fuse to eliminate any hazard to a user.

However, what is hardly clear to any EDP expert is: This safety function of the PE also exists if it is also connected at any desired number of points to the neutral line, which is also grounded, and forms a "combined" PEN line (so-called TN-C system, see figure below). Such couplings are conformal and result in cost reductions, since instead of a 5-conductor only a 4-conductor cable needs to be used. This has no effect on incandescent bulbs or refrigerators.

However, this is not so for EDP equipment: 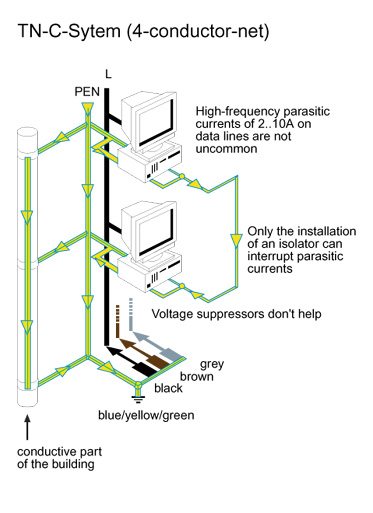 PE and N lines (return for all current consumers in the entire building) suddenly are only running together as PEN lines. Anyone now connecting the PC and CNC controller switches not only the existing PE/N coupling but also his data cable. The current can now suddenly decide whether it wants to use the correct path through the PEN line or rather the RS232 cable, or perhaps a favorably placed pipe line.

The consequences do not include damaging surges, but do result in currents of often several amps through the data cable and even across gas lines. And since more and more non-linear consumers are used with switching power supplies, the current flow is not sinusoidal with the expected 50Hz, but rather contains significant high-frequency components. When such currents flow unexpectedly through the shields of the data lines, then the effect is just as if an intermittent high-frequency noise transmitter were integrated directly into the computer system.

Such effects are unfortunately highly difficult to localize. A variety of electrical consumers is turned on and off at unpredictable times, so that the noise source always seems to disappear just when the IT technician on-site tries to track down such undesired current flows.

To ensure that there are not such problems in connection with the general wiring system, the IT technician must take two specific measures: 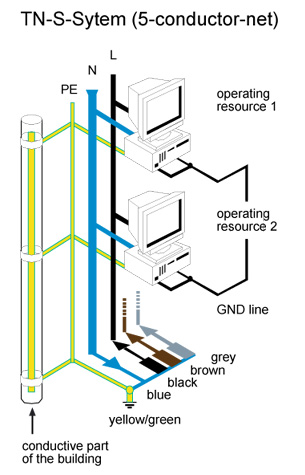 A computer installer can only be sure that he uses potential-isolated interfaces.

Only in this way can one achieve a high degree of decoupling between EDP and the electrical installation and thereby avoid being dependent on the expertise - or absence of it - of some electrician who is called in at a later date.

In practice, new construction always provides for a TN-S network - the added cost is not worth mentioning. In existing buildings, however, the computer installer can seldom convince the owners of the need for a complete overhaul of the electrical installation. Especially when commercial buildings are only rented it is nearly impossible to convince first the building owner and then the building occupant that his fully functional electrical installation has only "incandescent bulb levels", which is indicated in VDE publications as "non-EMC friendly" but still was approved...!

If the electrical installations cannot be tested / rectified, isolated interfaces / data isolators / fiber-optic cables must be used. Otherwise, part of the return current of fluorescent lamps, machines or air conditioning systems will flow as parasitic current through the shielding of data or network cables, leading to sporadic failures of the computer system.

Here, by using isolated interfaces, the person installing the computer can realize a working, trouble-free EDP system without unpleasant and business-harmful demands on the customer. EDP companies should make the use of isolated interfaces a distinctive feature and even promote themselves in public requests for tenders with such additional suggestions. The effects described here are immediately understandable by every technician and they can be verified. Well known insurance companies provide informative documents and very illustrative CD-ROMs to which the specialist supplier can refer.

And also consider this: The sensible use of isolated interface leads only to a minimal increase in the price for the entire IT installation: