Switch 230V/16A over the network and internet

Wiesemann & Theis GmbH is expanding their offering of network-based I/O systems with an industrial-grade 230V remote switch for load currents up to 16 amps. Model 57732 is immediately available and, like the entire Web-IO family, supports a variety of network and communication protocols.

The "Web-IO 4.0 Digital, 1x230VIn, 1xRelay Out" features one input and output each for 230V. Possible applications include, in addition to detecting and monitoring, remote-controlled switching of 230V circuits.

For traditional industrial applications the Web-IO supports OPC and Modbus/TCP on the fieldbus level. Applications from the realms of Industry 4.0 and residential automation are also implemented by the IoT protocol MQTT and a REST interface. The network management protocol SNMP enables use in computing centers and server rooms. For individual solutions the device can still be accessed network-based via TCP/IP and UDP or web-based via HTTPS.

In spite of the broad functionality, operation is user-friendly: An action system is used to very simply configure the response of the Web-IO to any desired events. In this way the user is informed for example of the switching state of an air conditioning compressor or machine via e-mail.

"Web-IO 4.0 Digital, 1x230V In, 1xRelay Out" is available from Wiesemann & Theis for 198.00 €. Commercial customers can try out the device for a period of four weeks at no charge. Additional information and ways to order can be found on the product page www.wut.de/230V.

Wiesemann & Theis GmbH was founded in 1979 by Reinhard Wiesemann and Rüdiger Theis. With 50 employees the company based in Wuppertal-Oberbarmen products microcomputer and network technology products and solutions. In 2001 Wiesemann & Theis was the first to introduce the Web Thermometer, an industrial temperature sensor with network interface, and so has for fifteen years already been specializing in solutions from the realm of Industry 4.0. 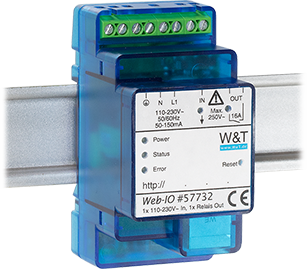