With the Web-IO 4.0 Wiesemann & Theis GmbH introduces the newest generation of their network-based remote I/O systems. The most important new feature: a completely redesigned Web interface. The new user guide simplifies operation without limiting the accustomed variety of functions.

Since its introduction shortly after the turn of the millennium the Web-IOs have been continually improved. Technical progress and customer wishes made it possible over the years to bring several protocols together on the field, network and application levels. "But with every implemented suggestion the configuration effort can’t help but become greater," reports CEO Rüdiger Theis. "The objective of the new development was to reduce this complexity and make startup as uncomplicated as possible."

The new user interface separates establishment of the desired communication paths and protocols from the actions which the Web-IO carries out as soon as a trigger appears. For example, if as the first step the user sets up the e-mail communication path, his second step can be to create an action which sends an e-mail when one of the inputs is switches.

The new interface creates the basis for expanding the range of functions in the future as well, and not at the expense of operability. In the current version the IoT protocol MQTT, which goes back to IBM, and the REST architecture for standardized M2M communication, were brought in via HTTP. The new protocols expand Modbus/TCP and OPC on the fieldbus level, TCP and UDP on the network level, and HTTP(S), FTP, syslog and SMTP on the application level.

The various models in the Web-IO 4.0 series are immediately available from Wiesemann & Theis. A four-week testing order can be placed for just the cost of shipping. More information is available on the overview page www.WuT.de/webio.

Wiesemann & Theis was founded in 1979 by Reinhard Wiesemann and Rüdiger Theis. With 50 employees in Wuppertal, the company produces micro-computer and network technology. Introduced even before the turn of the millennium, the Digital I/O Com-Server was the first network-based system for remote I/O. Wiesemann & Theis thus can soon look back over a 20-year history in the field of Industry 4.0.

(W&T) The new user interface of the Web-IOs enables fast and uncomplicated setup.

(W&T) In the first configuration step the communication paths, here e-mail, are configured.

(W&T) Actions can use configured communication paths. In this example an e-mail is sent when the state of the first input changes.

(W&T) The Web-IOs have been given a new Web interface in their 4th generation. 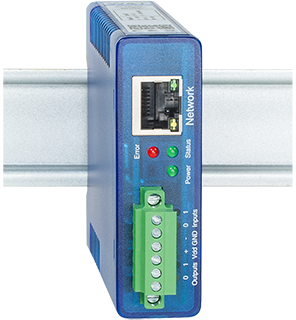