Application for all W&T devices with Ethernet connection:

Cable-connected Ethernet devices in the WLAN

There are many situations in which it is not possible or would be very expensive to connect devices to an existing network by cable:

When there is already a connection to an access point, WLAN bridges integrate all the LAN- and WLAN-side connected devices into the same broadcast domains. In other words, WLAN and LAN devices appear to each other as if they were directly connected through a switch. Such a modular solution with a Client Bridge as the central WLAN access for one or more wired network stations offers a number of advantages versus the use of devices with integrated WLAN interface: 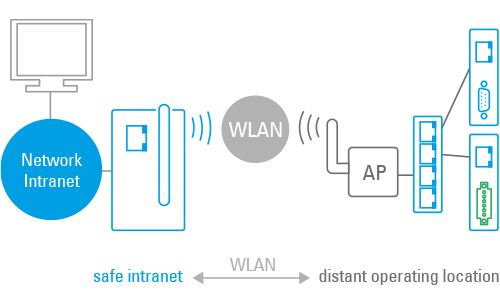 Illustration 1 shows monitoring of a door contact and temperature at a remote location using a WLAN Client Bridge. The remote installation consists of an access point, a Web-IO Digital and a Web-Thermograph, which are connected to each other through the LAN port of the access point.

This Ethernet island is linked through the WLAN Client Bridge installed in the master network. Although the arrangement of Client Bridge and access point makes no difference in terms of pure function, the access point was intentionally located on the remote side as a potential starting point for network attacks. When successful, if the Bridge is turned off an attacker gains access only to the sensor network and not to the sensitive master network. Accessibility of the remote network by other WLAN clients still remains intact.